Dozens of scientists from NASA and France, along with five tons of astronomical equipment descended on Dakar, Senegal in August 2018. They joined 21 Senegalese scientists in an important mission: collecting precious data in preparation for the flyby of an asteroid called Ultima Thule on January 2019. The project marked the first time Senegal was involved in a space mission to explore our solar system. Natasha Joseph from the Conversation Africa asked the chairman of the African Initiative for Planetary and Space Sciences, David Baratoux, about the mission.

What was the purpose of the mission to Senegal?

NASA’s New Horizon spacecraft has become famous for revealing Pluto’s amazing icy landscapes to the world. Now it’s pursuing its journey to the edge of the solar system – and to Ultima Thule, an asteroid from the Kuiber Belt Object (that’s a small chunk of rock or dirty ice which orbits the sun). This will be the most distant object ever explored by a man-made spacecraft.

It orbits around the sun and is an unknown world. So was Pluto, before New Horizon’s flyby.

Preparing a flyby requires precise knowledge about the size and shape of this object. However, Ultima Thule is usually not visible using ground-based telescopes; it is too far away and too small.

Figuring out how far New Horizons must travel to reach Ultima Thule has been one of the big challenges. This is where something a phenomenon called stellar occultations – and Senegal – came in.

A stellar occultation involves an asteroid and a star: the light from a star is blocked by the asteroid from reaching an observer. They’re similar to a solar eclipse. It’s generally a very short event. When Ultima Thulé is involved, it only lasts around a second.

Ultima Thule has already been involved in one stellar occultation, captured in 2017 from sites in Patagonia. That event helped NASA to calculate the trajectory New Horizons must follow to reach the asteroid.

New Horizons scientists predicted a new stellar occultation for August 2018, which would be visible in Colombia, Senegal, Mali, and Algeria.

So why was Senegal chosen?

A few factors were taken into consideration. These included security conditions, climatic conditions at that time of year, the existence of potential scientific partners, and what facilities were available.

Senegal has made great strides in astronomy and planetary sciences in recent years. That’s been largely driven by the Senegalese Association for the Promotion of Astronomy, led by Maram Kaire. Some Senegalese researchers are also involved in the African Initiative for Planetary and Space Sciences, which I head up. 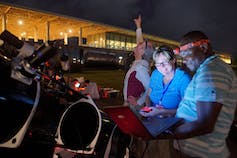 And so, NASA focused its efforts in Senegal. It sent 21 teams to the country, and six to Colombia, which had less favourable climatic conditions. One team, composed of Algerian astronomers from the Centre de Recherche en Astrophysique et Géophysique, also attempted to observe the occultation in the south of Algeria.

So was the mission a success?

Three nights were dedicated to preparation and training. The 21 teams in Senegal were composed of Senegalese, French and US scientists. Participants were selected based on experience, their ability to work in a team, and how quickly they could pick up skills.

Each team was responsible for a telescope and data acquisition system. During the first two nights of training, they oriented the telescope, placed the star that would be occulted by Ultima Thumé in the field of view and recorded 10 or 20 minutes of images.

We dealt with technical problems as they arose, and rearranged the teams as needed. On the third night the teams set up at the 21 pre-identified sites, training in real conditions, in rural and remote areas. People in the villages close to the observation sites were very welcoming and friendly – even when, in some cases, they found three strangers with a large telescope in their fields in the middle of the night.

The stellar occultation happened on the fourth night. Our teams were in place. Some weren’t able to collect any data because their view was obscured by clouds. Others recorded images 10 minutes before and after the predicted time of occultation. The data are now being processed by the New Horizons team.

How will Senegalese science benefit from the August mission?

This experiment was much more than a short-term visit of researchers from prestigious scientific institutions to a developing country. It was an inspiring example of scientific and international cooperation.

But such initiatives are only really valuable if they’re integrated into a country’s long-term scientific plans. That’s exactly what Senegal has done. The government recognised that this work fits in with some of its broader plans for higher education and research.

We were even granted an audience with Senegal’s President.

The Minister of Higher Education, Research and Innovation, Mary Teuw Niane, and his team organised a public outreach programme before and after the observation.

Scientists, some of them local and others from France and the US, delivered public lectures. We were all struck by the incredible questions and discussions these sparked. People asked us about the science itself, but also about how planetary science research and related technologies like telecommunications could benefit Senegal’s economic and scientific development.

Marc Buie, the chief of the experiment in Senegal and Colombia, commented to me that he had never seen such a thirst for knowledge among non-scientists. What’s really exciting is that many young people attended these sessions, so that may inspire a new generation of scientists.

This article is republished from The Conversation under a Creative Commons license. Read the original article. Share this via:

NASA’s big mission to search for life on Mars

Corporations could be allowed to own territory in space